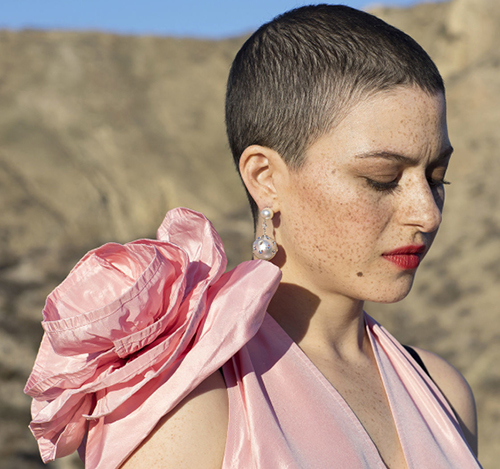 Hailey Gates’ directorial debut, which stars Alia Shawkat, as an Iraqi-American who dreams of becoming a Hollywood actress. Set in a mock Iraqi village constructed for training purposes on a Santa Clarita military base, it centers around a cast of “role players” hired to act as Iraqi civilians to increase the “reality” of the fictional environment.

“I was really interested in making a film that disoriented you to make you feel like you were in a foreign land and then re-oriented you to understand the environment to be deeply American,” said Gates of the project. “I am always drawn to low-stakes stories in high-stakes environments.”

Hailey Gates is a true polymath. For the past three years she has been traveling the world, from Pakistan to Liberia producing and hosting the award-winning documentary series States of Undress. She received her BFA from NYU in Experimental Theater and Playwriting. Her film SHAKO MAKO will screen at the 76th Venice Film Festival. She also works as an advisory editor at the literary magazine The Paris Review. She can be seen acting in Twin Peaks: The Return, David Lynch’s seminal reboot as well as the upcoming Safdie brothers film Uncut Gems.  Currently she is working on an adaptation of the novel Ghost Wall by Sarah Moss.

Alia Shawkat was born in California, her father is from Baghdad, Iraq, and her mother has Irish, Italian, and Norwegian ancestry. Success arrived early for Alia. Her career began at the young age of 11 when she landed a role on the series State of Grace (2001). She later starred as “Maeby Funke” on Fox’s Emmy-award winning Arrested Development (2003) where she portrayed a rebellious and mischievous member of the dysfunctional Orange County family.

Shawkat stars on the comedy Search Party, and plays the role of Tyler, a high-living American partyer in the 2019 film Animals, directed by Sophie Hyde. It is a film made by women and starring women as lead characters, about a changing friendship.  Shawkat said that she had never played a character like Tyler before, with her previous characters more relatable, she was “excited to play someone who was so fun, but so damaged”. Alia paints, is an accomplished pianist and speaks several languages.